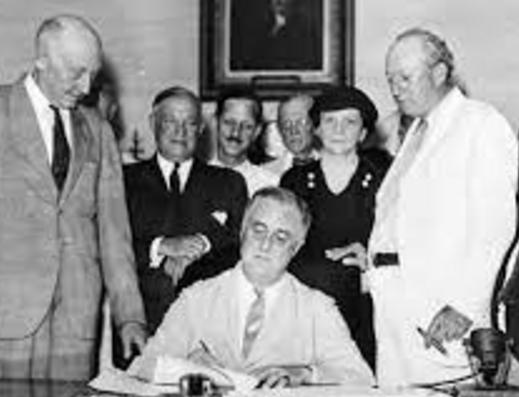 Before the progressive reforms of President Wilson:

2.  Millions of children worked in factories,

3.  Factory workers toiled 10 to 12 hours per day, with low pay and no pensions,

1.  The 19th Amendment (establishing the right of women to vote),

6.  The Revenue Act of 1913 (coercing wealthy tax-dodgers to support the Nation).

President Wilson was awarded The Nobel Peace Prize.  He:

2.  Established The League of Nations,

4.  Established (after 120 years of subjugation) the Independent Nation of Poland.

Fighting against the Anti-Worker Congress and racism of his era, President Truman eclipsed many soon-forgotten and do-nothing politicians by pressing for many breakthroughs in American History.  He  integrated the Armed Forces.  He strongly fought for Universal Health Care -- which resulted in the popular Hill-Burton Act. 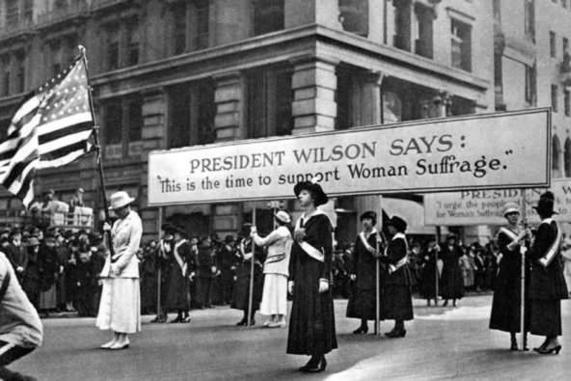 For nearly a century after The Civil War, widespread racism and segregation laws

were harsh realities for African-Americans.  President Teddy Roosevelt, however, ​made history when he publicly invited one of America's most distinguished and popular African-Americans to The White House:  Educator Booker T. Washington. 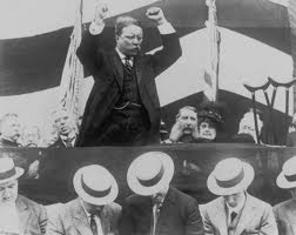 Without the progressive achievements of Presidents Teddy Roosevelt and Franklin D. Roosevelt, American workers in 2022 would be living under very harsh conditions:

1.  Six-day work week
2.  Twelve-hour work day
3.  Forced labor of children in factories
4.  Lack of safety regulations at the workplace
5.  Lack of employer-provided, or government-provided, health care
6.  Lack of any pensions for retired and disabled workers.

As staunchly patriotic Presidents, they fought to make America "Number One" in:

Opposed to murderous totalitarian dictators, they would have promoted much more trade -- and much larger American investments -- in Good Neighbor Democracies.

Instead of giving "supply chain status" to repressive Red China, Roosevelt would have persuaded American firms to build factories in impoverished Haiti, Ecuador, Columbia, and other Third World nations which are desperately hoping for stronger economies.  The poor children of Haiti hope for a brighter future, after the brutal 2021 earthquake.

Just as Roosevelt delivered goodwill and a stronger economy to Central America after building the popular Panama Canal, President Biden could improve our national image and business leadership in 2022 -- by establishing supply chain factories among our Good Neighbor Nations in the Western Hemisphere.  America, and not China, should be the world leader in helping impoverished Third World Nations to grow their economies.

American workers salute the legacy of LBJ  --  "The John Wayne Of American Politics."       As Senate Majority Leader, LBJ's skills eclipsed that of many less-capable politicians.  Historians praise LBJ as one of the few Progressive Presidents "who got things done."

Born in the Texas Hill Country, LBJ had a rugged Old West heritage.  His grandfather Big Sam was a prominent cattle rancher and farmer, who drove herds of cattle on the Chisholm Trail to Kansas.  Big Sam was a leader in the Texas Populist Party and the Farmers Alliance.  Following in Big Sam's footsteps, LBJ's father -- Sam, Jr. -- was a cotton farmer and school teacher, who was elected to six terms in the Texas State Legislature.

LBJ -- unlike today's strongly-ridiculed  "Corporate Democrats" -- was a strong leader.

As a Member of Congress during The Great Depression, LBJ staunchly supported FDR and The New Deal.  With federal help, he gained tremendous progress for Texas:  rural electrification, hydroelectric power, dams, paved roadways, schools, hundreds of public buildings, dozens of state parks, the LCRA, and many other landmark achievements.

He is ranked by historians as one of America's most effective Senators and Presidents.

Voters often complain about Hollywood's artificial and ridiculous fantasy films, gruesome horror films, and endless sequel films.  Hollywood is often criticized for strange CGI fantasy films, which offer no morality (or history) to teach children.  European films, on the other hand, often focus on real-life people and their problems.  Many Americans prefer European films, which do far more to elevate the dignity of working folk.

In The LBJ Era, American cinema was known for its high standards of patriotism, heroism, moral characters, and exemplary idealism.  Examples:  "The Ten Commandments," "Ben Hur," "The Robe," "Exodus," "The Sound of Music," "Quo Vadis," "The Battle of Britain."

Hollywood, to the public's disgust, has produced a long list of gruesomely-explicit horror films, depraved films of violence, and far-fetched (and often unprofitable) fantasy films. Producers who seek a quick profit in Red China are too cowardly and greedy to criticize Red China's mobile execution vans, concentration camps, mass public sentencings in outdoor stadiums, and illicit (and often fatal) mass harvesting of organs from dissidents.

LBJ scorned The Beltway for its "pathetic ignorance" of farmer and worker poverty.  He ACHIEVED prosperity for poor workers:  more union jobs, cheaper housing, paid time off, and home ownership.  He fought against immorality (overpaid athletes, sensationalism).
LBJ CHANGED the status quo, and enacted a long list of legislative triumphs for the poor.

Re-elected in The Landslide Victory of 1964, LBJ achieved many pro-worker goals: 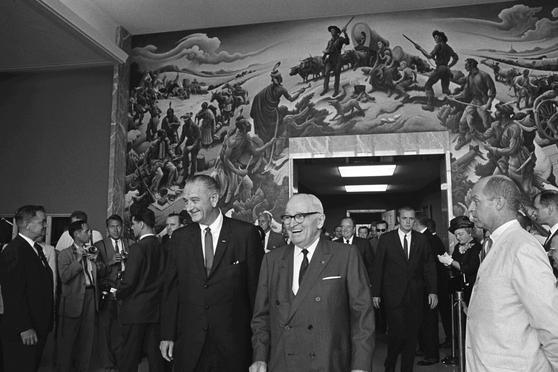 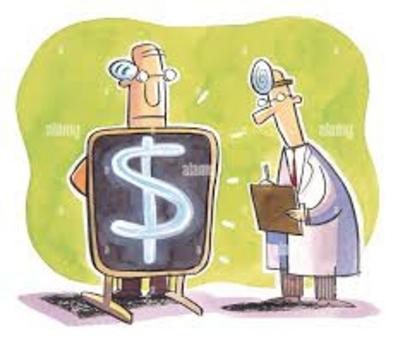 The Roosevelts -- against the intense opposition of Big Business -- ended the 6-day work week, 12-hour work day, child labor, and denial of pensions to poor workers. 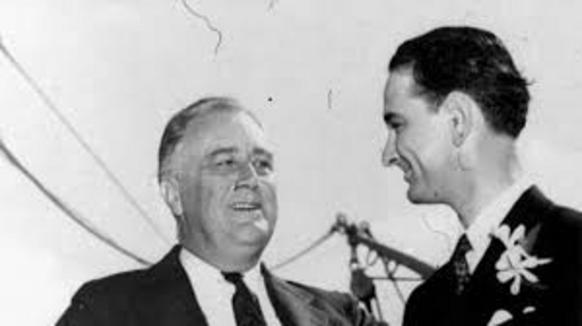 PRESIDENT  JOHNSON:  A  LEGACY  OF  PROGRESS

​Along with improving race relations, he made great strides against worker poverty.

Among President Roosevelt's many progressive achievements, he:

1.  Regulated Big Business, after the Robber Baron Era, with The Square Deal,
2.  Supported unions, raised workers' wages, and shortened the 12-hour work day,
3.  Signed into law the Meat Inspection Act and the Pure Food and Drug Act
4.  Broke up corporate monopolies and trusts, and
5.  Built the historic and revolutionary Panama Canal.

During the Great Coal Miner Strike of 1902, Roosevelt solved the crisis after creating an independent commission. The greedy owners would not budge, but TR's tough and moral stance gained the miners a 10% pay raise and a reduced workday (9 hours).

In the 1904 Northern Securities Antitrust Case, greedy barons sought to merge several large railroad networks -- to create the world's largest corporation.  TR filed suit in Federal Court to block the merger, after invoking the Sherman Anti-Trust Act.  Balking at the outrageous, unbridled and anti-worker greed of J.P. Morgan, TR changed the course of history when he turned the U.S. Federal Government into a regulator of Big Business -- as opposed to a "rubber-stamp" patsy. TR fought to end decades of worker poverty, rampant workplace deaths, and lack of regulations on product/food safety.

One of LBJ's most popular achievements was Medicare -- health care for the aged.

When Europeans and Canadians arrive in America, they are often shocked that "the Yanks" have no publicly-administered health care system (as at home).  For decades, they have enjoyed a National ID Card -- which permits FREE access to health care.

Since 1966, America's Medicare has managed health care for millions of retirees.  ​Restricted to those at least 65 years old, it is financed by a small levy on workers' wages (1.45% paid by workers, 1.45% paid by employers -- on every dollar earned).

Medicare is extremely popular for senior citizens.  Funded by a small national tax, it limits the fees charged by enrolled doctors and practitioners for all services -- exams, ER visits, surgeries, blood tests, MRI/CAT Scans, and hundreds of medical procedures.

​Medicare covers 58 million Americans in 2022.  Under Medicare, Health Care Firms and Doctors maintain privately-owned practices.  They are not owned or managed, in any way, by the Federal Government.  Medicare's responsibility is limited to fee regulation, national enrollment of participating providers, and a Single-Payer System of Payment.

The popular film "Prairie Giant" -- a fascinating biography of 5-term Governor Tommy Douglas -- explains how he enacted Universal Medicare for the Great Nation of Canada.

Medicare in Canada is for ALL AGES (and NOT ONLY for 65+ Seniors, as in America).

Since 1966, Medicare has been a financial success.  It has saved the lives of millions.

The popular Federal Program, however, has been hit with a 3-10% fraud rate -- due to criminal doctors and embezzling firms.   The substantial fees which Medicare pays to doctors are sometimes "not lucrative enough" for greedy and criminal practitioners.

Many doctors want to buy an expensive second home, a new yacht to park at the marina, BMW's for their teenage children, or marble walls for their medical offices.

In hundreds of cases, the U.S. Government has fined and imprisoned greedy doctors and companies for outright fraud committed against the popular Medicare Program.

Here are just a few examples of greedy millionaires who defrauded Medicare:

1.  A Florida doctor was indicted for embezzling $2.1 billion from Medicare,

2.  A Florida doctor was indicted for embezzling $26 million from Medicare,

3.  A Texas doctor was sent to prison for 5 years for Medicare fraud.

Those who argue for "Wall Street's Approach" to health care -- in favor of unlimited wealth for millionaire doctors and firms -- have completely ignored the poverty, lack of affordable health care, deaths, and medical sufferings of poor working families.

Annually, thousands of workers are forced into bankruptcy because of medical costs.

Unlike today's Wall Street-bribed Corporate Democrats, Presidents Truman and LBJ  opposed the Barons of Wall Street -- to strengthen the Moral Hand Of Government.

Despite a tough uphill battle, the years of hard work and rare courage of Truman and LBJ established Medicaid and Medicare -- affordable health care for poor Americans.

These two Great Presidents -- renewing hope for America's poor -- were keenly aware of the great progress made in Other Nations on accessible and affordable health care:

Deeply aware of senior poverty, FDR signed into law The Social Security Program.  Before Roosevelt, America's patriotic and poor workers -- despite working 50 to 70 years over a lifetime of hard labor -- were denied any hope of a pension in old age. 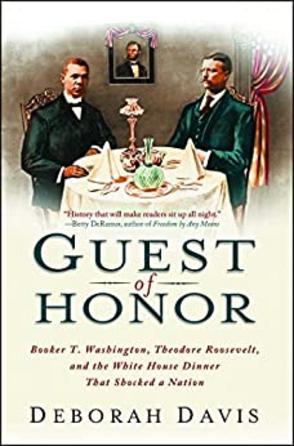 THE ROOSEVELTS:  PROGRESS FOR POOR WORKERS

During the American Revolutionary War, General Kosciuszko led the American Army to build state-of-the-art military fortifications.  As a Commander of Combat Engineers, the Polish General's brilliant fortifications in New York State enabled The Thirteen Colonies to win the famous victory at The Battle of Saratoga -- which prompted military assistance from France.

​Without French military support, the American Revolution might have been a failure.  After The Saratoga Victory, France's critical military support gave General Washington the decisive edge to achieve victory against Great Britain -- at The Battle of Yorktown in 1781.

Gen. Kosciuszko was a key figure in establishing the U.S. Military Academy at West Point.

The Polish General was granted 500 acres and $15,000 from Congress for his achievements during the Revolutionary War.  However, he refused to accept the Grants.  He demanded that both Grants be dedicated to the building of Free Schools for African-Americans.  Keenly aware that many Founding Fathers were slave owners, Kosciuszko was an 18th-century Abolitionist.

How many of today's "leaders" possess the generosity and genius of Kosciuszko?

​General Kosciuszko's generosity stands in stark contrast to the greed of today's leaders.

How many of today's overpaid politicians seek policies to help America's poor workers?

Why do teachers live in poverty?  Why are college graduates mired in massive debt?

Fighting against greed, key leaders have achieved key reforms in our history: 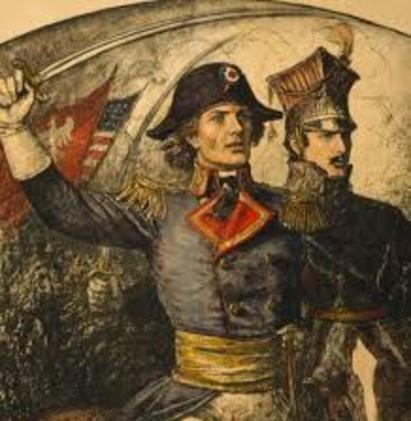 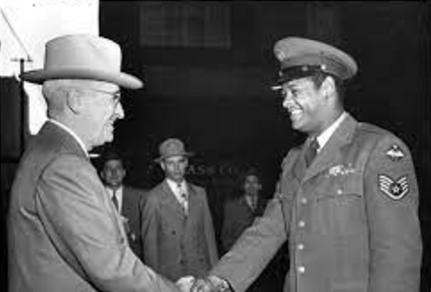 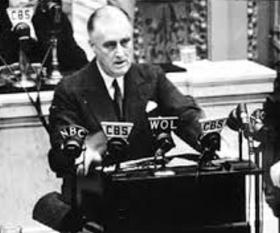